Telco managed TV services (i.e. IPTV) had a great deal of issues obtaining content and it struggled terribly.  Some thought it would be built on UGC (User Generated Content).  However #YouTube stole that crown.  Many Telcos bundled it with the Broadband offer and then ticked you off as a TV Subscriber; whether you watched it or not.  Unfortunately it offered a lesser experience and needed linear TV to make it palatable to the average consumer.  In the main, people just want to be fed TV programmes and not have to be their own ‘channel-line-up’ producer each time they sit in front of the box.  We are inherently lazy and Millenials are no different – If anything their attention span kills the theory of sitting down and selecting a nights viewing by App scanning; especially after a hard days work on a screen.

This New Yorker (below) story about bundles growing on Internet or Web TV is fascinating as it looks at the TV Subscription angle.  However I felt that the story should have dug much deeper.  The author should have looked at the garnered revenue from subscriptions and investigated where that money relates to content:  i.e. Explore the way content is funded because this is also an important factor in the business model of TV and the bundle, be it over-the-air, over cable or over the Internet.  Here is an article that @TimWu could reference: http://abovethecrowd.com/2010/04/28/affiliate-fees-make-the-world-go-round/

Extract:
“But those who predicted that the Internet would kill the bundle may have spoken too soon. Internet TV, in fact, is now growing its own bundle—the so-called “neo-bundle.” This year, Dish television and Sony have begun selling a version of Internet television that centers on a bundle, albeit one that is smaller and cheaper that the original offered by cable companies. Dish’s Sling is the most exciting and enticing: it offers ESPN and twenty other channels for twenty dollars a month. (You add an extra fifteen dollars if you want HBO). Sony’s Vue has fifty or so channels, for fifty dollars a month, but no ESPN or HBO. Apple, meanwhile, is likely to launch its own version in the fall.

In short, instead of the Internet killing the bundle, the bundle is coming to the Internet; it would not be surprising if, in the next year or two, half a dozen more neo-bundlers join the game. This may come as a surprise to those who expected the television of the future to resemble, say, a smartphone screen, where every channel would be roughly like an app that you subscribe to à la carte. But overestimating change in the television industry is a rookie mistake.”

P.S. By the way, RabbitTV already bundles ‘free-content’ for you for a small fee.  Which gives kudos to my theory that we are all lazy when it comes to TV viewing.  “I’ll pay 10 bucks to someone to do it for me instead so I can just watch it instead of wasting all that time searching & selecting.” 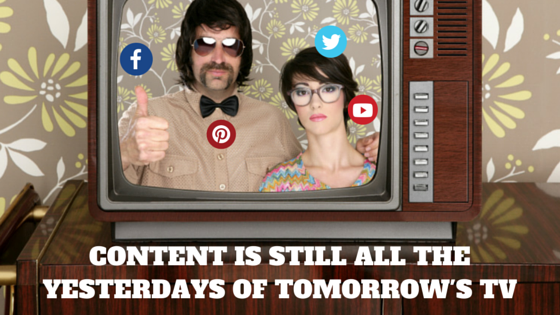 Once upon a time we switched on the TV and watched a programme or two, in the evening after we had tea, when the kids were in bed and it was time to settle down to relax.  TV Time was limited as the TV signal would shut down at night and eight-year-old Carole Hersee would appear (in the UK at least).  We had a choice amongst Light Entertainment and Drama, Documentaries, News and Sport all chosen for us and delivered when somebody else thought best.

Life is a little different now because:

Today we want TV at Anytime, Anyplace, Anywhere and we want to watch What We Want, When We Want, Where We Want. We want to watch Live TV, with the use of Pause and Rewind Live TV.  And if we miss missed the beginning of something we need Start Over TV so that we can go back to the beginning of the programme that we have joined late.  We need Catch-Up TV for shows we have missed.  We need to Store Live TV programmes for later viewing on a Hard Drive (Personal Video Recorder) or a Removable Storage device with the possibility of using Series Recording for Binge Watching. We also want to be able to Side Load content onto a Companion Device to consume later when in the garden, or perhaps travelling on a bus or train.   We want a Whole Home PVR system or Network PVR so that we can have Follow Me TV that allows us to start watching in one room and then take the content into another room and join it from where we left off in the other room.  We want Companion Screen driven TV Everywhere so we can Throw and Fetch programmes from those devices to different screens in the home.   We want Over The Top TV so we can have non-Linear content and not be restricted to a Schedule.  We want Interactive TV with Applications that allow us access to Weather, or Horoscope or Games and a lot of other stuff all delivered over the Cloud and Home Network.  We want to be able to Search for, and Recommend content to other people on Social Media.  We don’t want this on a STB or CPE we want all of this on a Smart or Connected TV, in 3D or Ultra HD 4K or perhaps Super Ultra HD 8K.  We need it in High Dynamic Range, so that we get the best quality on a Curved OLED, millimetre thick, Flatscreen TV:  24 Hours a Day, 7 Days a Week, 365 Days of the Year completely uninterrupted.

TV Content has however NOT broken the boundaries that technology has.  Geo-Blocking, Distribution Rights, Landing Rights, Syndication, Franchising and all that shenanigans is hindering and hampering not helping, other than to further slow the transformation of TV – Perhaps that is a good thing?

Throw out your TV – TV as we know it is dead!  There is a flourish of articles on the demise of PayTV with headlines such as ‘The Future of Television – Can Cable Survive?’ which I saw in Forbes online.  All you youngsters who claim you dont need a TV subscription because its available cheaper elsewhere will have a shock coming when the money runs out and all you are left with is re-runs of old Films, Programmes and Documentaries….All of you out there that want ‘a la carte’ – That is: ‘what-you-want-when-you-want-where-you-want’, need to know what that will mean in terms of revenue and the financing of the content arm of the media industry. Despite the age of this post it is still relevant today and it is a subject also well covered by Mark Cuban a more famous blogger than I.

The marriage of many parties in the Interactive TV systems has always been the Achilles heel for a fully integrated homogenous interactive environment. We have had other pre-2nd screen (i.e. 2nd-Window) systems since the 1990s that have suffered from the same issues described in this rather oldish article: (considering Zeebox has already walked into the sunset) http://edit.hollywoodreporter.com/behind-screen/zeebox-s-anthony-rose-people-589252 – However it is worth some reflection:

Programme/TV Show/Film producers (Pre-Production and Post Production) are still unable to have a “write-once” for a “read-anywhere” business plan due to competing (proprietary/standardised) technologies that are all designed for the same job of Value Added Services. There were and still are proprietary and standardised CMS systems available but that still did not answer the age old problem of incompatibility across broadcasters, operators selection of technology in the global TV eco-systems. The DVB Consortium made something that tried to answer this early on with something called DVB-PCF (Transcoding across different VAS systems) which the BBC worked heavily on. It never saw the light of day.

Therefore creating and franchising a show using a SocialTV / Companion Screen technology and single back-office system is seen as a pre-requisite in the conquering of this Value Added Service arena. The Show the Voice in Holland was successful using Social TV but this cannot be sold as a package into Belgium for example for techno-political-business reasons.

2nd Screen technology technology fragmentation is the same issue as in ALL previous Interactive TV middleware issues. Then add to this new Non-TV technologies (i.e. designed for the Internet all trying to latch on to the TV eco-system). Fit-For-Purpose is an issue that also dogs the TV eco-system. Different Social TV and Companion Screen offerings now numbers in their 30s with Civolution, Egonocast, Shazam, WyWy etc. integrating on-screen, 2nd-window, off-programme and full dual-screen synchronisation.

There are lots of other things that are around in the new world of TV Tech – the failed 3DTV and now UHDTV and 4K etc. that are at least keeping us occupied.

I read this on twitter this morning: “There’s a very real disconnect between some of those in the tech press and actual human beings, it seems.”. And I agree!

I think that this is absolutely a correct assessment of our world and our lives that are swamped by TV and all things that people think we should be doing in TV! It is a realistic reflection and observation of the following: Marc is a “Humanist” in a Technological world not a Technologist in Humanity: Technologists are creating things they think we want because they can not because it is required. I hate it when technologists say “It is what the Consumer wants”…most of them have never been a real consumer or know any real consumers. I have blogged this at WordPress (TVANGELIST) covering the aspect of TV consumption and use amongst the differing age groups many moons ago. I am in Europe and see a whole different set of more complex dynamics than the USA with fragmentation with respect to language and a myriad of different rules per country.

When I work I do not consume TV at work although I am in the TV business. When I travel I do not consume TV other then when I get to put my feet up in a hotel and I am not allowed to put Movies on my Hotel Tab. CNN and BBC seems to get the most of my attention…If I am not at the bar watching a football match or drinking with colleagues. Or emailing because I am out of time-zone sync. When I get home I have to kiss the wife, hug the kids, get re-settled into my family life which as Marc says results in the TV only being available to chill at the end of the evening. The PVR is full, AppleTV is available, Blu-ray is available, I have DVD and Video-Cassettes available. I have IPTV available from a Telco. Now I have mobile Handheld video and and iPhone, PC access via my MediaCentre…But I have little or no time to consume or at least little or no time to be searching the “world” for a show that I and my spouse might like that moment in time….