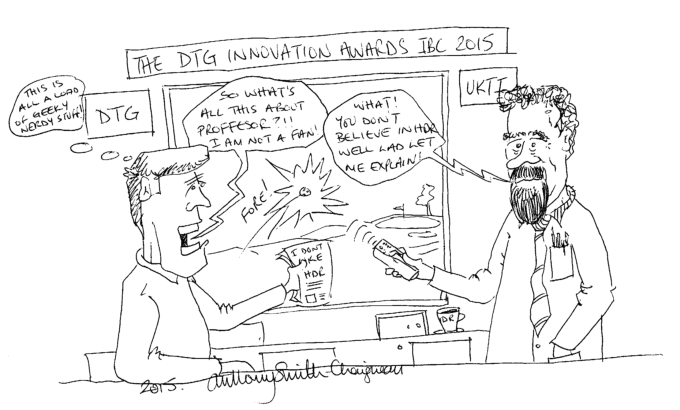 goHDR was a finalist in the DTG Innovation Awards, and had a presence on the DTG stand at IBC 2015.  This is the first time that I have seen the light as far as HDR is concerned.  Up until now I have not seen any good reason as to why HDR should be advertised as a ‘product’, rather than a technology ‘feature’ or ‘option’ for the TV industry.  Desperate times needs desperate measures I suppose, especially in a market where 3D flopped and 4K is being chased by 8K.    At the IBC 2015 show all the furor was around HDR offering brighter, better pictures, however I finally saw a real and very good practical use for the technology being demonstrated by goHDR a spin-off from the University of Warwick, England.

goHDR was able to show how HDR technology can be used to enhance ‘segments’ of the screen or ‘items’ in the shot. i.e. in difficult lighting conditions (e.g. outside broadcasting) at, let’s say, St Andrews, you could highlight a golf ball and track it in a cloudy sky enhancing its visibility as a unique enhanced HDR object … and there were many other examples of other use-cases.  In simple terms goHDR could be described as the video version of Dolby Atmos, with its manageable ‘sound-objects’…For those who are not familiar with Atmos, you are now able to manipulate sound objects to create an immersive multi-dimensional environment in a theatre.  Imagine hearing a helicopter that is flying from behind you, over your head and then enters the screen, or an arrow shot towards you flashes past your left ear and you hear it fly past … OK, OK it’s got to be heard to be believed.  It is truly amazing.  However in this story HDR was invented for video and designed to enhance the picture quality of a TV in both HD and UltraHD.  Without the technobabble, HDR is simply all about high contrast at the pixel level that creates depth and dimension and makes colors seem punchier…however it is applied to the whole picture on the TV, not objects in the scene as shown by goHDR.

The technology that goHDR demonstrated has to be fully analysed for its relevance to TV and whether or not it really does what it says on the tin,  however, the basic understanding is that it really has taken HDR to a new place and, by the way, it works very well on handheld devices.  Suffice to say I saw its relevance in Surveillance i.e. HD & UltraHD CCTV, also for Military, Scientific, Broadcasting, Medical and many other areas where you might want to manipulate a segment or item in a video using HDR for optimum effect.  I feel that I have seen the light and can now be more positive about this technology.  But hey! Don’t let me tell you the story, let the wonderfully ebullient Professor Alan Chalmers explain it to you at goHDR explained his enthusiasm is uplifting.